Decorative Stitches for Everyone with Swan Amity 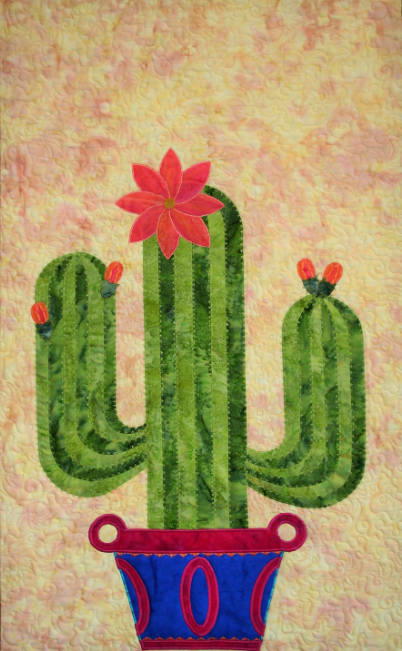 Make this beautiful potted cactus wall hanging using basic fusing techniques and some of the fun decorative stitches on your machine! Join Swan to learn the ins and outs of basic fusing techniques and decorative stitches to make your cactus a masterpiece. Personalize your cactus by choosing from flower options and small cactus fruit to make your cactus a special creation all your own. You’ll learn to enjoy all that your machine has to offer and see just how pretty your threads can be when you use all of your stitches on your fused projects. 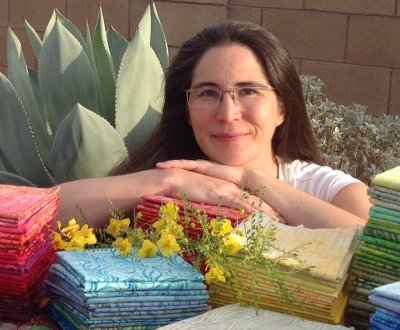 Swan Sheridan was born in Bend, Oregon in little house on Colorado Street.  She currently lives
in Tucson, Arizona with her super hero husband and turbo charged daughter.
Swan’s interest in all things textile related began when she was very young.  She tried everything
from spinning wool, to cross-stitch and finally landed in the world of quilting during grad school
as she awaited the birth of her first nephew.  She dabbled in appliqué with that first quilt in the
interests of covering a mistake and thus did necessity become the mother of invention.
Appliqué truly took over Swan’s quilting life in 2004 while she was pregnant with her daughter.
Swan had a dream during that time that repeated a magical image of dragonflies rising out of a
brass urn and flying toward the moon.  Unable to shake the idea that this image needed to
become a quilt for her baby-to-be, Swan set out to make this quilt come alive and as a result
produced her first large appliquéd scene.
In 2009, with her daughter in preschool, Swan began to refine her appliqué skills always with
unique designs.  Soon after she took a job with Bella Quiltworks in Tucson, Arizona, offering her
the opportunity to be immersed in the quilting world in a whole new way.
Swan began producing patterns for sale in early 2013 and regularly exhibits her work in local
and national shows.  She teaches in Tucson and around the country, offering classes in appliqué,
color, machine and hand quilting, and decorative stitches.
On any given day, you can find this quilt artist half buried in fabric, brandishing her needle and
thread, and otherwise surrounded by implements of creativity.

Decorative Stitches for Everyone with Swan Amity

Cost:
$ 99.00
Machines are provided and lunch is served. Supply list provided when signing up. Discount for multiple classes!
Contact Info
Hours
Find Us